Some things are simply a treat in life. Only one thing to do, but to enjoy them, and if you haven’t had the chance, I can recommend you to add the Festival Musicas do Mundo to your music festival bucket list. It’s in a bit of an odd place in terms of location, Sines, Portugal. Originally a small fisherman town, that grew out of proportion because of an oil refinery that is now based there. On some days you can smell the burning of oil (or something like that), but there’s one thing they do right, they’ve joined hands with the major of Sines and sponsor the festival. The major is originally a member of the communist party who is a big fan of world music. And where communism and capitalism meet, well you get something unusual like this festival I suppose. 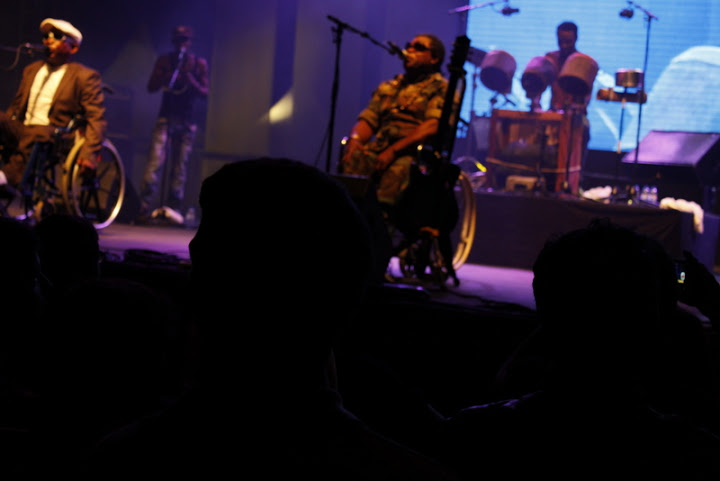 The festival is more than a week, each night offering concerts of large variety, but most of all extreme good quality of music and musicians from all over the world. And because, well, the communist background, quite a few are free, and the rest for a really reasonable price. The locations of the concerts are even more brilliant, the main stage on top of a rock in the enclosure of a former castle and when you descend to the beach, that’s where you find the second stage.

You can probably picture (and hear) the magic happening, modern tango from Argentina, African rhythms (from Mali, from Congo – swinging around in wheel chairs mind you!), punk from Bosnia, a modern folk band from Italy with music that is supposed to cure the bite of tarantula spider or French Jazz combined with African beats on a xylophone – all is possible on those stages. I think that is also the trick, seeing these bands and musicians live comes with so much energy that you simply have to enjoy.

If you’re not convinced yet, well the last thing I can throw in, there’s great food around and during the day to rest from all the concerts there are wonderful beaches.

Of course I didn’t find this music festival by accident, dear Portuguese friends invited me already three years ago (one of them being an expert in music – so for every concert he was able to give all the ins and outs of the bands, so I didn’t even have to study the programme), because they knew I would love it. I finally made it and indeed loved it. Hopefully some of you will add it to your bucket list as this is simply a festival you shouldn’t miss!