Cruzing at high speed through three different African cities invariably makes you think. Of course there are the simila 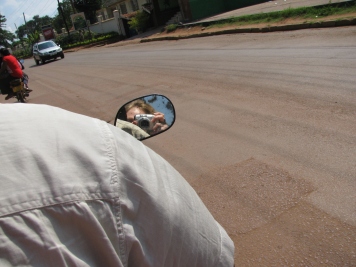 rities, but the differences become even more notable. Where Kampala is humming with the sound of traffic all the time, Lusaka is showing signs of busy rush hours, but Maputo looked rather empty, or perhaps quiet would be a better word. In all cities I saw new construction efforts, but for some reason Maputo just missed that particular buzz of new initiative. In all cities I saw people walking, many destined to walk all the time as they simply had no money for transport.

The people of course were also different, where the Ugandans were fond of speaking out against their government, the Zambians were more careful, law abiding almost, and the Mozambiquans just coming to the understanding that they actually can speak up, and that it is their role to play as civil society. In all countries I experienced incredible heat, which makes you slow down naturally (and sweat, I have no clothes left without white sweat marks, sorry for sharing this), but the pace that people walked in Maputo was so incredibly slow, but also the passiveness in their reactions, compared to their already not so fast (walking) northern neighbours. My patience was tested to the limit.

And I think this is the lasting impression that I will have for now. Leaving Uganda and Zambia I concluded that the sheer size of the problems in the countries were overwhelming, but at least there was a feeling of some kind of change being under way and people determined to address them. However, having seen the capital of Mozambique, I can only conclude there are countries even worse off. I’ve never seen such bad pavement (for the woman among you, just like Brussels, don’t ever where heels in Maputo!) and the amount of building almost falling down or apart.

I think that was probably what made me most sad. As out of all three, Maputo showed the most character. In a way due to its colonial history, and it’s something that you recognize, but overall it’s situated on the seaside, slopes going up providing magnificent views, and so much potential for a blossoming tourism, harbour industry and just a beautiful place to live. The shops however are almost empty – except for the products that are imported from South Africa. There’s no production surplus to speak of, and when there’s no drought, there will be flooding. It just makes you wonder where to start.

I don’t have an answer of course but there was one more thing that struck me in all three. There were many Chinese and they all dislike Nigerians. These two people in itself have little to do with each other, but their presence seldom encouraged a positive remark. They either shoot at their employees (in a Zambian copper mine), they might kill your women (rumours in Zambia when a woman gets pregnant by a Chinese), con you out of money (mentioned both in Uganda and Mozambique about Nigerians), take your work (about the Chinese) etc. For the Chinese I might be just as judgmental, as I’m really not sure what to think of the African-Chinese trade relations (and to be brutally honest the odor on a plane really doesn’t improve when it’s already full of African sweaty men, added by Chinese sweaty men). However the Nigerians fascinate me, as that will be my next port of call for a training in about two weeks’ time.

In the mean time I will probably mull over my past experiences some more, but will also enjoy a Holiday in South Africa and upon return enter a brand new kitchen (this week my kitchen was demolished, Thursday the new one is coming!). So until then I might blog a little less, but be sure to find me back here to share my next part of this journey.

Ps I haven’t quite made it out of work yet, ended up writing my final reports at a small NGO working on transgender, LBTQ issues in South Africa, the journey continues…